An armillary sphere (variations are known as spherical astrolabe, armilla, or armil) is a model of objects in the sky (in the celestial sphere), consisting of a spherical framework of rings, centred on Earth, that represent lines of celestial longitude and latitude and other astronomically important features such as the ecliptic. As such, it differs from a celestial globe, which is a smooth sphere whose principal purpose is to map the constellations. 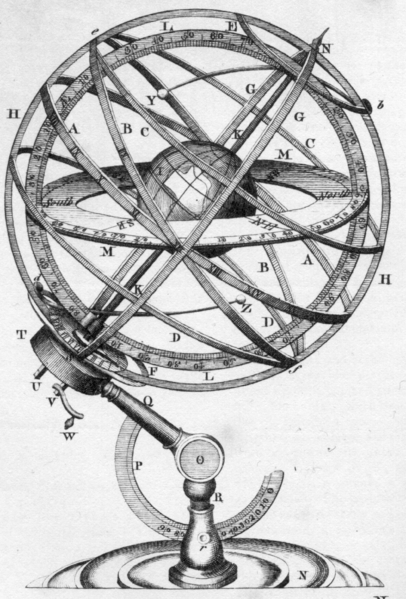 The exterior parts of this machine are a compages [or framework] of brass rings, which represent the principal circles of the heavens.

2. The ecliptic B, which is divided into 12 signs, and each sign into 30 degrees, and also into the months and days of the year; in such a manner, that the degree or point of the ecliptic in which the sun is, on any given day, stands over that day in the circle of months.

4. The Arctic Circle E, and the Antarctic Circle F, each 23½ degrees from its respective pole at N and S.

6. The solstitial colure H, passing through the poles of the heaven, and through the solstitial points Cancer and Capricorn, in the ecliptic. Each quarter of the former of these colures is divided into 90 degrees, from the equinoctial to the poles of the world, for showing the declination of the sun, moon, and stars; and each quarter of the latter, from the ecliptic as e and f, to its poles b and d, for showing the latitude of the stars. 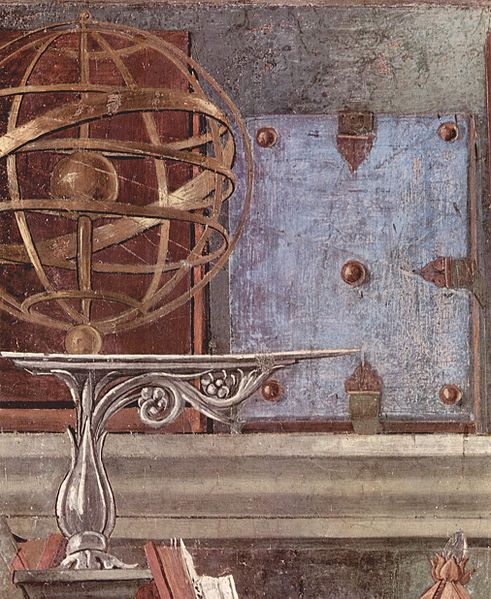