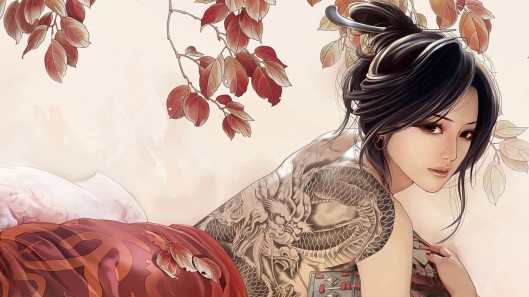 The dragon is by far the most popular mythological creature represented in Japanese graphic and glyptic art. The reason is undoubtedly twofold: the first being its great mythological and symbolic significance and the second being its almost ideal artistic adaptability, both in expression and in form.

An early Chinese writer describes the creature’s appearance thus: “Its head like a camel, its horns like a deer, its eyes like a hare, its ears like a bull, its neck like a snake, its belly like an iguanodon, its scales like a carp, its claws like an eagle and its paws like a tiger” – a mighty assemblage of creatures indeed. Thus its fierce face and undulating scaly body provided the Japanese artist an ideal subject in which to give full imaginative vent to power of expression and swirls of motion. Furthermore, in the graphic arts, such as painting and lacquer, dragons were often portrayed along with eddies of water and swirls of dense, ominous clouds – a perfect combination for decorative effects. Like so much mythological iconography, the dragon image reached Japan from China, which in turn had adopted it from Indian culture. Northern Indian Buddhism had adopted elements of Naga (snake) worship, which when it reached China was in turn assimilated into local beliefs regarding dragons. In China it embodies male power and fertility (yang). From the time of the Han dynasty (206 BC ~ 220 AD) it became the symbol of the emperor. The imperial dragon of China is identifiable by its five-clawed feet, while courtiers were permitted only to use the images of four and three-clawed dragons. It is the three-toed version which appears in Japanese art.

Pictorially the Japanese dragon resembles the Chinese dragon. From the description of the dragon it can be seen that its fierce face and scales and spines are also ideally suited for the powerful chisel strokes of the sculptural metal artist, and it was the favorite subject of the famous Goto school of sword furnishing artists. In general dragons are powerful, fierce, omnipotent, and representative of celestial power. While physically partially embodying the serpent, they basically differ from this creature, since the dragon in general is representative of benevolence and in art, although depicted as powerful and fierce, is not loathsome or repulsive. One of the Four Heavenly Creatures, the dragon is chief of all scaly animals and presides over authority. (The phoenix is chief of feathery animals and presides over virtue. The Kirin is chief of all hairy animals and presides over literature, while the tortoise is chief of all shelled creatures and presides over divination.) The dragon ascends into the heavens in the spring and descends into rivers in autumn, being known respectively in Japanese art as the ascending and the descending dragon.

In China, four types of dragon were believed to exist: the Heaven Dragon (tien-long) who guards the gods; the Spirit Dragon (shen-long) who produces wind and rain; the Earth Dragon (di-long) who marks the courses of streams and rivers; and the Treasure Dragon (fucan-long) who watches over the wealth hidden from mankind. Each was believed to reign over one of the four seas encompassing the earth. It was the Spirit dragon which caused rain and storms and which found its way to Japanese iconography. Powerful ink paintings depict them amidst swirling clouds. In Japanese art the dragon is traditionally never displayed in its entirety, for to see the entire dragon is to invite instant death, the punishment for looking upon too much divinity. Thus in art its undulating form is represented weaving in and out of clouds or water. The dragon is also commonly depicted in art, more commonly in metal art, entwined about a sword. This alludes to the story of the god Susano-o, who, after destroying the eight-headed serpent, found a beautiful sword within its tail.

Dragons are also identified by their colors, which range from red, violet, and blue to green, yellow, white, and black. The rain dragon is known as Amary, and is said to be black. Fukury, is the dragon of good luck and is represented climbing to the top of Mount Fuji – a symbol of success in life. The yellow dragon is identified with the imperial household. The white dragon’s breath is believed to become gold. The saliva of the violet dragon turns to crystal balls. The dragon fears iron and is also capable of being slain, as noted in legendary tales. It is also a lustful creature, and the fabulous animal known as Kirin is said to be the offspring of the dragon and the cow. Dragons are associated mythologically with various gods and sages. A dragon emerges from the sea at the command of Kannon and is the steed of the goddess Benten. The dragon of Japanese mythology was adapted and modified from Chinese concepts which in turn reflected Indian and Taoist influences. It originally embodied the principles of the male and the female, the Yang and the Yin, and was associated with the powers of water, both of rain and of the sea, each of which was of equal importance respectively to the Japanese farmer and fisherman. With the advent of Taoism the dragon became endowed with magical powers, being able to transform itself into innumerable things. Under the influence of Buddhism it finally became endowed with spiritual and philosophical qualities and became the protector of divinities and a symbol of the transience of life and the perpetual state of change and evolution. Under the influence of Shintoism it related to the omnipotence of the imperial household. Specifically the dragon may assume any dimension. It can fill the universe with its body or become so small as to be invisible. Thus the dragon’s many-sidedness embodies the idea of the male and the female principle and the utmost attainment of the embodiment of wisdom. The continuous changes and variations of life are symbolized by its unlimited powers of adaptation, accommodating itself to all surroundings and therefore having no end, like the everlasting cycles of life. The dragon’s breath is changed into clouds from which rain pours down and lightning flashes forth. It is also believed to carry water from the earth to the skies, and therefore in periods of drought it is worshiped in various ways. There are numerous popular legends associated with the Dragon King (Ryu-jin), who is reputed to live in a palace at the bottom of the sea. His chief messenger is depicted as a white serpent carrying the sacred jewel (Tama), which controls the ebb and flow of the tides and represents omnipotence. This jewel, which was once stolen from the Dragon King, is often illustrated in Japanese art as having just been caught in the claws of a dragon. The Dragon King is represented as a bearded old man with a dragon on his back, the dragon’s head forming his head covering. When aroused, the Dragon King is responsible for the storms of the sea. Finally the dragon is associated symbolically in art most frequently with the tiger and the phoenix. The tiger, while usually a yang force, in this association represents the material or yin forces and is bested by the dragon, which represents the spiritual or celestial or yang. The breath of the tiger creates the wind, and together with the clouds of the dragon, rain is created. The dragon-phoenix combination again represents the yin-yang principle, the dragon representing the positive yang and the phoenix the negative yin.

People born in the year of the dragon are healthy, honest, and brave. Dragon-year people are considered fortunate because their sign represents the heavens, or celestial powers. They are energetic and sensitive and inspire trust. Their word is good, their opinions sincere and just.