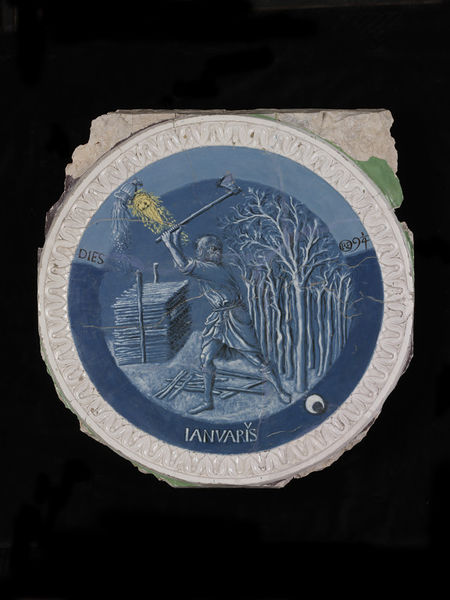 These twelve roundels showing the Labours of the Months formed part of the ceiling decoration of the studietto (or little study) of the Florentine banker Piero de’ Medici. Though based in part on traditional medieval representations, some relate more closely to a text on agriculture by the 1st-century Spanish writer Columella.

The decoration was said to create ‘the greatest admiration in whoever enters the room’ and doubtless reminded Piero of country life at the family villas.

The design of each roundel is based on contemporary agricultural practice as well as descriptions of agriculture in classical texts – one important source being Columella’s De Re Rustica, a 1st century treatise that appears in Piero’s inventory on 1465. The light and dark blue around the border indicate the periods of light and darkness. The hours of daylight are noted on the right. At the top of each tile is the sun in the appropriate house of the zodiac.
Recent restoration has revealed that the tiles were not round but square. Each has ribs along the back. These add strength to the tile, and also reduce the bulk of the clay to prevent problems in firing. The curve of each panel allows us to determine where it would have been placed within the barrel-vaulted ceiling.

The study that Piero de’ Medici created in the family palace in Florence was a miniature treasury, famous throughout Italy. According to the architect and sculptor Filarete, ‘the floor as well as the ceiling [was] enamelled with most worthy figures, so that whoever enters is filled with admiration’. These glazed terracotta scenes, which look like drawings on blue-prepared paper, formed part of the rich ceiling decoration. Luca’s use of pigments and glazes to produce these unique works was an extraordinary technical achievement.