Jan Brueghel the Elder was one of the founders of a typically Flemish tradition of the “art collection” which developed in Antwerp in the seventeenth century. These eclectic “art collections” were known as kunstkammern, translated as “rooms of art” and are meant to offer a glimpse into the depth and variety of these collections accumulated by the Dutch aristocracy. Much like Raphael’s The School of Athens, these paintings, through a use of vanishing points, scale and perspective, are meant to create an illusion of volume and distance and thus make the two-dimensional canvas appear three-dimensional. Something Matisse and Mondrian would later reverse in their own works some 400 years later.

This set of paintings on the five senses (Sight, Hearing, Smell, Taste, Touch) was one of the most successful collaborations of Peter Paul Rubens and Jan Brueghel “the Elder”.

Rubens placed his figures in the magnificent courtly scenes created by Brueghel as settings for these allegories of the senses, resulting in a series of enormous quality and esthetic appeal. The subject was widely employed in Flemish painting.

Sight was considered the most important of the senses since the time of Aristotle. The two animated figures are Venus and Cupid. Here Cupid shows Venus a painting with a Christian theme, The Healing of the Blind Man, which alludes to the recovery of sight through one of Christ’s miracles. Venus and Cupid are, of course, characters from Roman mythology, adapted, in turn, from the Greeks. Look to the left of Venus and you will see a double portrait – a male and female figures in traditional Flemish dress. The couple in the portrait are Alberto and Isabel Clara Eugenia – the Habsburg archduke and archduchess whose collection is represented here.

Here, alongside religious imagery we see scientific instruments (telescopes, globes) pointing to the importance of astronomy and natural sciences; a Persian carpet, suggesting the wealth of the world; Roman portrait busts and a variety of paintings on canvas. Many are Rubens’ own works reproduced in this allegory. The large painting on the right of the Virgin and Child, framed by a lush bouquet of flowers (another Dutch tradition) is a collaborative effort between Jan Brueghel and Rubens where Rubens painted the figures. 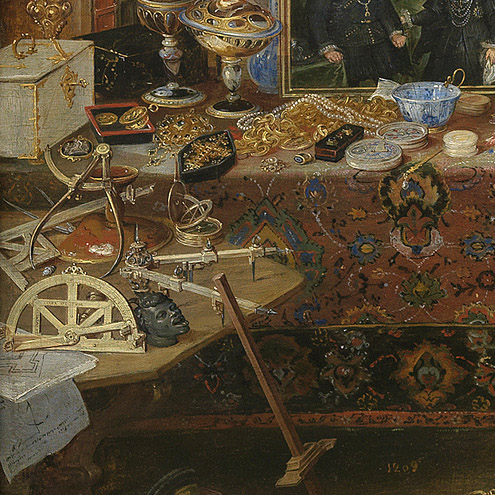 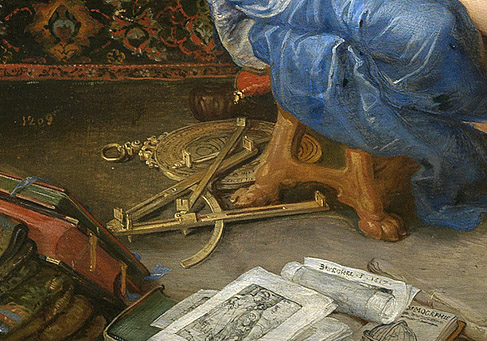