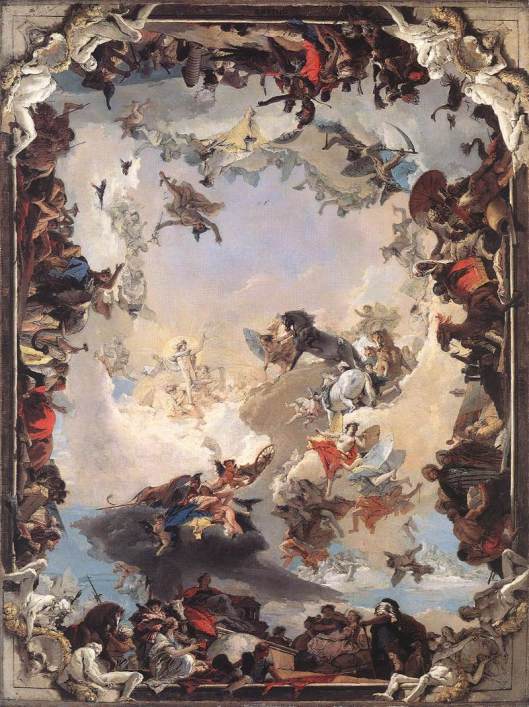 Allegory of the Planets and Continents by Giovanni Battista Tiepolo (1752)

This picture, Tiepolo’s largest and most dazzling oil sketch, represents Apollo about to embark on his daily course across the sky. Deities around the sun god symbolize the planets, and allegorical figures on the cornice represent the four continents. Tiepolo presented this preliminary sketch to Carl Philipp von Greiffenklau, the prince-bishop of Würzburg, on April 20, 1752, as his proposal for the decoration of the vast staircase ceiling of the Residenz, often considered the artist’s greatest achievement. 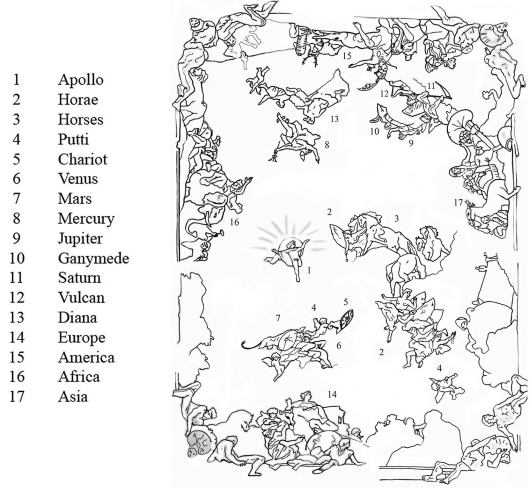 From December 1750 to November 1753, Tiepolo was employed in Würzburg by Prince-Bishop Carl Philipp von Greiffenclau to decorate his magnificent palace, the Residenz, designed by Balthasar Neumann. The artist’s first commission was to fresco the banqueting room, the Kaisersaal. This work is the modello for Tiepolo’s decoration of the ceiling above the grand staircase, for which he received the formal commission in July 1752. Earlier decorative programs divided the vault of the stairway into separate fields treating historical subjects. The revised program, inspired by the succession of Greiffenclau as prince-bishop in 1749 and his decision to engage Tiepolo to decorate the Residenz, abandoned history in favor of a more conventional allegory lauding the prince-bishop as Apollo, the god of light and patron of the arts, illuminating—both literally and figuratively—the four corners of the earth.

Tiepolo’s composition centers on the figure of Apollo as he prepares to make his daily journey across the heavens (see Images). In front of and below him butterfly-winged Hours (Horae) present his horses and reins, and putti push his heavy gold chariot up a bank of clouds. Around him are grouped the Olympian gods who govern the planets. Most prominent are Venus and Mars, who repose on a dark cloud. Rotating 180 degrees, we have Mercury, his right hand pointing toward Apollo’s horses as he announces the beginning of another day to Jupiter. Around the cornice are grouped depictions of the four continents. Figures at the four corners are painted in monochrome, to be created in stucco by Antonio Bossi, Tiepolo’s collaborator, along with his son Giandomenico, on the project.

The most important difference between the modello and the ceiling is the transposition of the continents of Europe and America. The result of this change is that rather than initiating the visitor’s experience as she does in the modello, in the fresco Europe has become its climax, heightened by the addition of an oval portrait of Greiffenclau held aloft by Fame and Glory (or Virtue). Another change from the modello to the fresco is that in the former the light source is imagined as emanating from Apollo rather than from the various windows in the stairwell. These and the many other changes, including a number of a secco revisions, underscore Tiepolo’s restless genius and illuminate the fact that even a modello of this size and complexity documents only a stage in a constantly evolving process: a process that took place within the established limits of traditional fresco practice and balanced artistic license with iconographic models. Clearly, the modello had a dual function. If, on the one hand, it proposed an iconographic scheme, on the other, it served as an independent demonstration of Tiepolo’s fantasy and artistic brilliance.