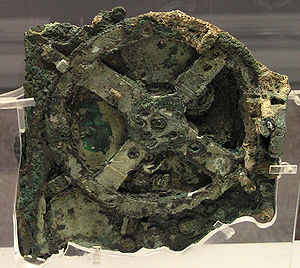 The Antikythera mechanism (Fragment A – front)

The Antikythera mechanism is an ancient analog computerdesigned to calculate astronomical positions. It was recovered in 1900–1901 from the Antikythera wreck,but its significance and complexity were not understood until a century later. Technological artifacts approaching its complexity and workmanship did not appear again until the 14th century AD, when mechanical astronomical clocks began to be built in Western Europe.

The mechanism was housed in a wooden box approximately 340 × 180 × 90 mm in size and comprised 30 bronze gears (although more could have been lost). The largest gear, clearly visible in fragment A, was approximately 140 mm in diameter and likely had either 223 or 224 teeth. The mechanism’s remains were found as 82 separate fragments of which only seven contain any gears or significant inscriptions.

The Antikythera mechanism is displayed at the National Archaeological Museum of Athens, accompanied by a reconstruction made and donated to the museum by Derek de Solla Price. Other reconstructions are on display at the American Computer Museum in Bozeman, Montana, the Children’s Museum of Manhattan in New York, in Kassel, Germany, and at the Musée des Arts et Métiers in Paris.

The mechanism’s fragility precluded its removal from the museum, so the Hewlett-Packard research team and X-Tek Systems had to bring their devices to Greece. HP built a 3-D surface imaging device, known as the “PTM Dome”, that surrounds the object under examination. X-Tek Systems developed a 12-ton 450 kV microfocus computerised tomographer especially for the Antikythera Mechanism.

Reconstruction of the Antikythera mechanism in the National Archaeological Museum, Athens (made by Robert J. Deroski, based on Derek J. de Solla Price model)