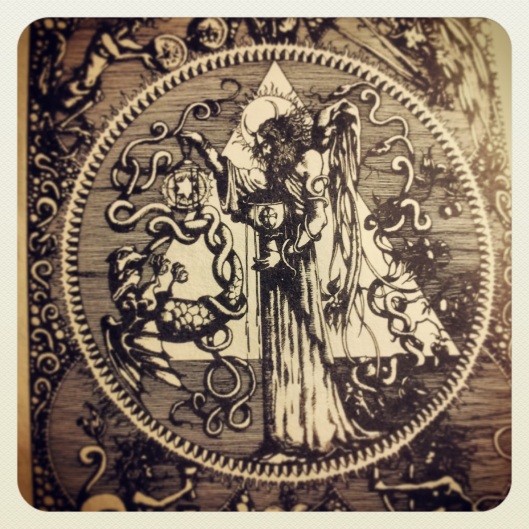 Saturn ruler of Capricorn, holding the Ace of Cups, the Graal. Love gives us the message now that to have it, one must be in right alignment with who we truly are, and create long lasting structures that support that.

In ancient mythology, Capricorn is related to the god Pan. He is the son of Hermes and is one of the Satyrs, human-like creatures with the horns and legs of a ram and a horses tail. He was raised by nymphs after his mother, disgusted by his appearance, abandoned him. Pan tended sheep and goats and was a talented musician. His libidinous nature also drove him to go after the nymphs who usually fled in panic at the sight of him. When the nymph Syrinx was no longer able to flee him she begged to be turned into reed which Pan used to create the well-known Pan flute. At one time Pan himself was fleeing from the monster Typhon and tried but failed to turn himself into a fish. However, he supported Zeus in his battle with Typhon, and in thanks Zeus immortalised him by transforming him into a star constellation.