Illustration of the Celestial spheres

15th-century manuscript illustration of astronomy as one of the seven liberal arts, showing Ptolemy as its patron. 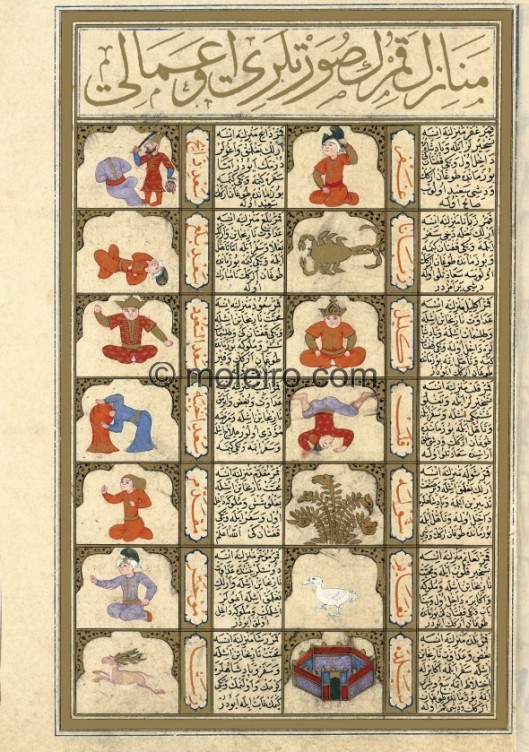 The 16th and early 17th centuries were the most fertile period of Turkish-Ottoman painting, with the reign of Murad III (1574-1595) being particularly prolific in beautiful works of art, such as this Matali’ al-saadet or Book of Felicity by Muhammad ibn Amir Hasan al-Su’udi.

This Book of Felicity – which the sultan himself, whose portrait appears on folio 7v, ordered to be translated from the original Arabic – features descriptions of the twelve signs of the zodiac accompanied by splendid miniatures; a series of paintings showing how human circumstances are influenced by the planets; astrological and astronomical tables; and an enigmatic treatise on fortune telling.

The last double-page illustration in the manuscript refers to a short treatise dealing with the mansions or stations of the Moon (manazil al-qamar). This is another astronomical subject that was taken up by astrologers and an iconography was developed at least as early as the 14th century to illustrate the text. The movement of the moon across the night sky and its different phases could be easily followed and standard reference points were provided by groups of stars marking its daily journey eastward. Medieval astronomers in the Islamic Near and Middle East relied on twenty-eight groups of stars for reference, which became known as Lunar mansions or resting-places of the Moon. The shift to an astrological meaning for these mansions was natural and both text and images probably developed at an early stage. The two facing pages include the general title in gold ink repeated in the cartouche at the top of each folio. The text and illustrations are organized in four vertical rows with seven mansions on each giving a total of twenty-eight. A narrow vertical cartouche that includes the name of the mansion in red ink is sandwiched between seven lines of text inside a square to its right and the illustration to its left. The figures depicted in the vignette, all set within a gold, broken-arch frame are sometimes difficult to interpret because the name of the mansion is self-explanatory only in several instances, often being based on passages in the text or an earlier iconography that is unclear to us. Without a doubt, the mansions of the moon are rarely depicted in Islamic astrological manuscripts therefore a consistent imagery may not have developed throughout the centuries.

manuscript, miniature, moon, sun, The Creation of the Sun and the Moon

JTVP55F5D5JC – Pisces zodiac sign and labour of the month

The Tripartite Mahzor (Hungarian Academy of Sciences, Kaufmann Collection, MS Kaufmann A384) is a fourteenth-century prayerbook produced in the area of Lake Constance around 1320. It is divided into three parts. The first part is preserved in Budapest, in the [Kaufmann collection] of the Hungarian Academy of Sciences (MS A384). It contains prayers and piyyuts for the special Shabbats, Purim, Pesah (Passover), and the Song of Songs. The second part (London, British Library Add. Ms. 22413) contains prayers and piyyuts for Shavuot, the Book of Ruth, Sukkot and the Book of Ecclesiastes. In the third volume (Oxford, Bodleian Library Ms. Michael 619) there are prayers and piyyuts for Rosh ha-Shanah and Yom Kippur. While the size of the codices is different, the size of the text areas and the style of the illuminations are the same. Therefore, the three volumes probably originally constituted a one- or two-volume codex, which began with Rosh ha-Shanah and ended with Shavuot. It may have been cut and divided into three parts some time later. None of the volumes has a colophon. The only name given is that of the scribe. He was a certain Hayyim. His name is written at the end of the commentary to Ruth (“חיים חזק”, vol.2, fol. 80v), and this word is decorated in the text in another page of the same volume (fol.103v). A certain scribe Hayyim (חיים סופר) also copied the so-called Schocken Bible (Southern Germany, c.1300; Jerusalem, Schocken Library, Ms.14840), and two close stylistic relatives of the Tripartite Mahzor: the Pentateuch of the Duke of Sussex (Southern Germany; London, British Library, Add. Ms 15282) and the Sefer Mitzvot Katan (Lake Constance Region, probably Konstanz, ca.1310; Vienna, Österreichische Nationalbibliothek Cod. Heb. 75).

In the first volume, the prayer for dew is decorated with zodiac signs and the labors of the months (fols.142r-145v). The types of representation of the signs of the Zodiac in our manuscript closely correspond to similar representations in contemporary Christian calendars, breviaries and psalters. Within the framework of the religio-astrological interpretation of the cosmic system, the Zodiac represents the signs of the night sky while the illustrations of the months stand for the earth by representing the labours characteristic of the given period of the year.

The most interesting and most enigmatic of all of them is without doubt the sign of Gemini. Generally, the representation of this sign ranges from a transformation of Castor and Pollux as a caressing pair of a male and female to two armed knights embracing in a fight. In our case we can see two dog-headed figures facing each other holding an unidentifiable device with a shaft in their hands (a mirror with a red frame? a shaft or stick with a red plate? a flower?). It also seems as if the figure on the right had a kerchief on its head, suggesting that the figures are male and female.  Such a representation of Gemini is unknown elsewhere in Europe, and Gotthard Strohmaier has succeeded in tracing this motif to the Islamic world at the same time recognizing it also in one of the enigmatic ornamentations of a mediaeval German altarcloth dating from the end of the 13th century, the so-called Zehdenicker Altartuch, one of the treasures of the Märkisches Museum in Berlin. The problem requires further investigation. In the accompanying medallion, in Müller’s and von Schlosser’s view, the female figure can be taken to represent the idealized love of mediaeval German courtly and knightly love, Frau Minne, with crown and sceptre, sitting in the flowering branches of a tree and holding a falcon on her left hand. Narkiss and Sed-Rajna recognize in this figure the labour of hawking or the flower-bearer characteristic of the month of Siwan. In Sed-Rajna’s opinion the man is wearing a crown. Perhaps rather a falconer’s cap? In general, both motifs – the falconer/hawking and man/woman with flowers – were common for April-May-June and August. Sed-Rajna stresses that the female figure may hark back to an antique prototype, that of Rosalia, too, representing the awakening of Nature. The fantastic representation of Cancer, perhaps betraying Oriental influence, is also remarkable: “a hybrid animal composed of a wolf’s body and head, a griffon’s paws and a fish for a tail” – this type of representation is unique to our manuscript, it cannot be found anywhere else. Next to it we see a man digging the soil as the labour of the month of Tammuz – while the representation of Scorpion as a tortoise should not surprise us, because an illuminator living in the vicinity of Lake Constance at the beginning of the 14th century may not have had the faintest idea what a real scorpion looked like – the labour of the month of Marheshwan is the vine harvest. It may be noted in this context that the representation of Scorpion as a tortoise among the signs of the Zodiac was common in contemporary Christian art, too. The combined sign of Aquarius and Capricorn radiates a certain rustic atmosphere with the beautiful sweep (draw-well) and the kid quenching its thirst from the bucket. Next to it we see in two medallions a sower and a peasant “holding up a boot while warming his bare foot by the fire, above which hangs a cauldron.” The figure of a man warming himself by the fire was a widespread motif in the representation of the winter months (December, January).