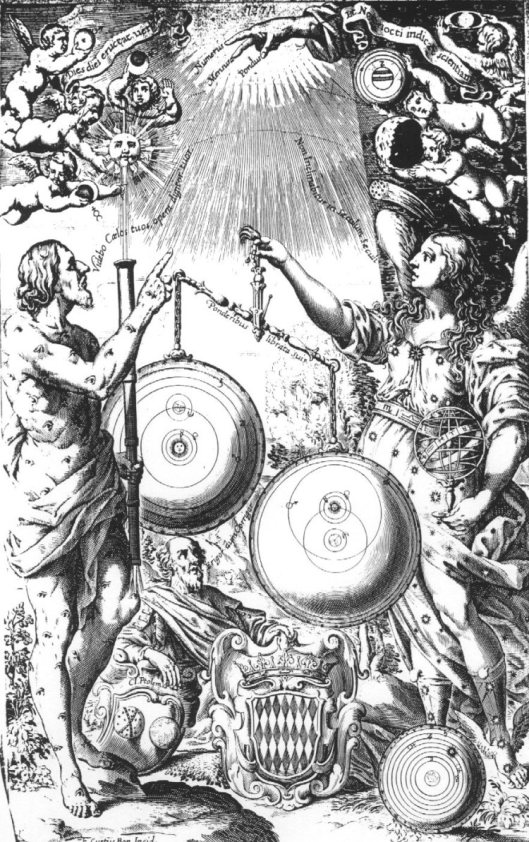 Ptolemy lies prostrate at the feet of the Tychonic and Copernican models, saying “I will rise again!” He didn’t.  This was the book that Galileo was supposed to write. 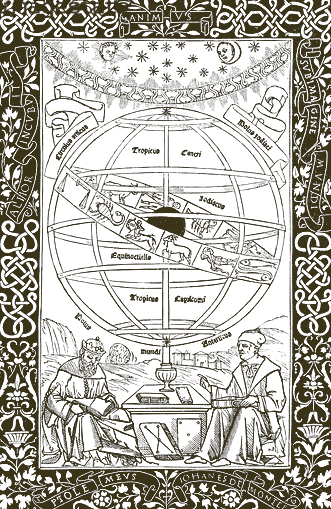 Frontispiece illustration from Ptolemy’s Almagest, Venice, 1496, depicting Ptolemy instructing Regiomontanus under an image of the zodiac encircling the celestial sphere.

15th-century manuscript illustration of astronomy as one of the seven liberal arts, showing Ptolemy as its patron. 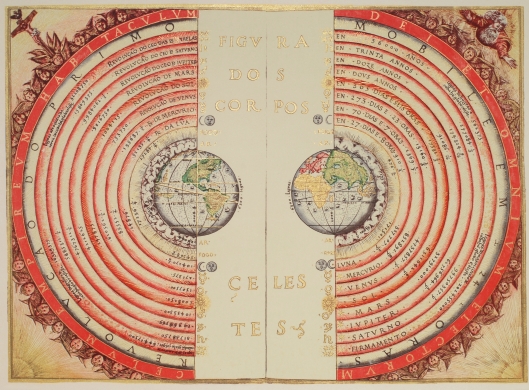 Figure of the heavenly bodies — An illustration of the Ptolemaic geocentric system by Portuguese cosmographer and cartographer Bartolomeu Velho, 1568 (Bibliothèque Nationale, Paris).

BRION DE LA TOUR, Louis.
Centre du Monde. Systemes de Ptolomee et de Ticho-Brahe. Paris, the Author & Desnos, 1761. Original colour. 360 x 525mm.
Two theories of the solar system, according to Ptolomy of Alexandria and to Tycho Brahe. On the left is Ptolemy’s, with everything revolving around the Earth; on the right is Brahe’s, with the sun revolving around the Earth but the planets revolving around the sun. On either side is engraved descriptive text in French, and around that is a separately-printed frame-like border. 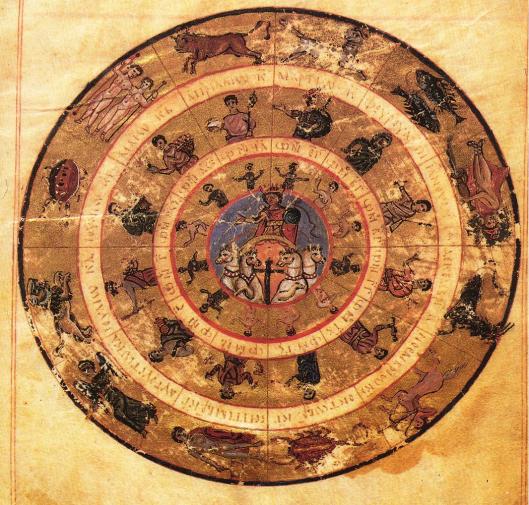 Ptolemy’s ‘Handy Tables’ (Procheiroi Kanones) are a revised and extended version of the astronomical tables in his ‘Almagest’. Ptolemy designed this set of tables for practical use (especially among astrologers). He only wrote a short introduction giving intructions for using the tables, but he said nothing about the theory underlying them, even though in a few instances he had modified the theory since writing the almagest.

Among the additions to the tables are a chronological table (know as the Kanon Basileion or ‘Ptolemy’s regnal canon’) and a geographical table (the list of ‘noteworthy cities’, poleis episemoi) extracted from his Geography.

Ptolemy’s handy tables achieved a more widespread distribution in antiquity than the Almagest. In late antiquity many commentaries were written on them. These were mostly limited to explanations of how to use the tables, but an exception is the so-called ‘Great Commentary’ by Theon of Alexandria (late 4th Century AD), which attempts to explain the relationship between the Almagest and the Handy Tables.

Vat. gr. 1291 is the oldest and most beautiful MS copy of the tables that has been preserved. It dates from AD 813-820 (reign of Pope Leo V). Other MS copies of the same age are Leidensis gr. 78 (88?) and Laurent. XXVIII, 26.
The Helios miniature is found on fol. 9r, and it is assumed to be the original start of the MS. It is of circular design, with a central emblem figuring Helios in his chariot. There are several circles surrounding this emblem and all are subdivided into twelve segments. The inner circle has twelve small naked female figures, six light- and six dark-skinned. Outside that are twelve numbers in Greek (henceforth called ‘labels’). Outside that twelve clothed male figures representing the twelve months. Outside that are written the month names in Greek (indicating a specific date in the month) and on the very outside of the figure one may see the emblems of the zodiac signs.

The labels written near the nymphs define the date and time in which the Sun enters the zodiac sign depicted in the outermost ring. Boll (1899) calculates from these labels that they are valid for the 3rd Century, but Neugebauer quotes a publication (van der Waerden, 1954) indicating that he was wrong, and that it should be 9th century instead.

The labels are extremely interesting in the light of the labels used in the astrological images of the Voynich MS and will now be describe in more detail. Essentially, they give hours during the day or night, written usng the Greek letters of the alphabet. They are preceded by two characters. The first is always the same and consist of a superimposed omega and rho, to indicate ora (hour). The second looks either like an N or an M with some other small symbols written near them. They indicate either night or day, and the colour of the nymph corresponds with this distinction (light-coloured near M and dark near N).