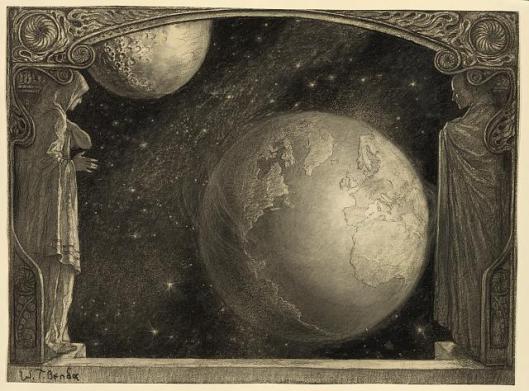 Wladyslaw T. Benda. The Earth with the Milky Way and Moon.

Charcoal on paper, ca. 1918. Published in “The Future of the Earth” by Maurice Maeterlinck, Cosmopolitan, March 1918. Cabinet of American Illustration. Prints and Photographs Division, Library of Congress (110.1)

Benda depicts two timeless figures that frame and contemplate his imagined vista of the earth and moon suspended on the edge of the Milky Way. Light from the lower right throws land masses of North America, Europe, and Africa into bold relief, accentuates the earth’s majestic beauty, and illuminates a visn of earth within its galactic context.